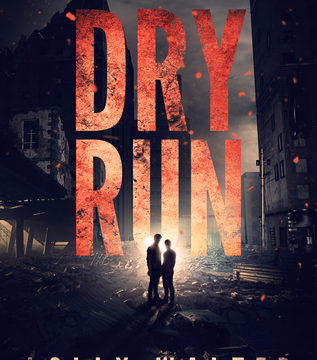 This book is like Westworld meets Holes, and I’m 100% on board with that…

Joe works for a sex tourism company that offers to fly in rich tourists and fulfill their weird, forbidden fantasies. For some reason, a lot of those fantasies involve long, elaborate foot chases. Like, seriously. They run for miles before they “get caught” and the john gets to act out the rest of the fantasy. Not anything like my idea of a good time, but ok sure.

Almost immediately, Joe ends up being assigned to train Devin, a new guy who is also a novelty for being one of a very small number of white people who live in the city. The racial dynamics of the story are really integral to the plot, and it comes into play right off the bat. More about that in a minute. Devin comes across as surly and kind of a jerk at first, but given the harsh world they’re living in and some things that we find out about his upbringing, it actually is pretty understandable.

The main romantic pairing of the story had a sense of inevitability right from the get go, but I still really enjoyed the chemistry between the duo and their falling in love story. And it might seem silly but I really appreciated seeing an older, more experienced, more confident character who is shorter and smaller than his partner. Short people ftw!

Which brings me to Joe. The best parts about this book were the two main characters, but my heart was especially drawn to Joe for so many reasons. He is my most beloved archetype: tragic, hard-working, competent, traumatized, loving, determined. I could go on, but I’ll just sum it up by saying that Joe is awesome and I adore him.

This book is probably considered “New Adult”. It fits into that weird gray area where it’s still about teenagers, but the content is more mature than typical YA. And it really is more mature. There is quite a bit of dub-con and non-consensual activity, both in discussion and in the action of the story. At first I was wondering why the author didn’t just age up the characters a bit, but it turns out that there is a plot-based (and heartbreaking) reason why they’re all relatively young.

I can’t write a complete review without mentioning the issue of race, which is prominent in the story. I really liked that almost all of the characters that we get to know, with many different personalities and motivations, are not white. I think the author deals with the race issues sensitively, at one point directly addressing that “whiteness” is a cultural construct and you can’t just tell by looking at someone what ethnicity they are. However, I’m white and the author is also white so I will leave it up to those whose experiences are being represented to say whether this portrayal feels fair or not. I just wanted to acknowledge that it comes up and features pretty prominently in this book. It does feel timely, given what is going on in the country right now.

Overall, I thoroughly enjoyed Dry Run, pretty much from beginning to end. Was it perfect? Not perfect, no. But it was so heartfelt, so binge-able, so emotionally complicated, and pushed so many of my personal buttons that I have to give it five stars. I’m positive that I’ll be rereading this one, and I’m absolutely going to be reading the sequel. Which, delightfully, will also be released this year.