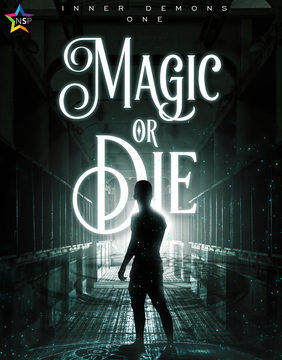 There are probably people out there who would love this book, but unfortunately it wasn’t quite right for me.

The only expectations I went in to Magic or Die with came from the summary that I read on Goodreads, and it really made it sound like it sound like the kind of story I would be into: characters with traumatic pasts and emotional depth, high stakes involving the commodification and trafficking of magically gifted people, and a queer romance subplot. All things that I love and look for in my stories. However, Magic or Die didn’t really deliver on much of that. The seriousness and the drama of the situation were watered down by a strange mess of world-building that didn’t really make sense, hackneyed villains (at one point there was a non-ironic use of the word henchmen), and a very awkward romance between the main character and one of his students.

Maybe I should start by saying what’s good about the book. I think conceptually it’s a cool idea. Even though they’re not perfectly explained, the magic systems in the story are interesting and creative. I like the idea that some people have inborn magical talent and some get it through demon possession. And I will admit that some of the trope-y aspects of the book were fun: the misfits coming together as a team, the found family, and the unique and strong personalities of each of the students.

I think if a younger version of me had been reading this I probably would have been less critical and more willing to give the benefit of the doubt when it came to the issues with world-building. But as it was, I found myself confused by and skeptical of the situation that we’re presented with: our MC James is brought back to the CMRD, the very institution where he was trained and taught for several years, and yet he narrates all of this as if he’s experiencing it for the first time. Despite our direct line into his thoughts via first-person narration, James appears to have almost no actual memories of anyone or anything at CMRD. He tells us he was there, but then never thinks to himself, “Oh, I remember that time I hung out with my friends in this courtyard” or “I remember my own weird, plexiglass-walled cell” or anything like that. Which brings me to another strange bit of worldbuilding: all the students in the story are being held captive in cells, which initially sounds cruel and scary, but then we keep hearing about all the stuff that they have in their cells: beds with comforters, fluffy pillows, stereos, televisions, teddy bears. Every emotional punch in the story seemed to follow the same pattern: set up something that sounds dramatic and compelling, but then pull it back and the last minute and smooth it over so that it isn’t so bad after all. The biggest culprit of this was with James’s backstory. The backstory of a man watching his student and lover euthanized before his eyes was the probably the most stirring aspect of this entire story, but James hardly seems to care about Cody aside from his own guilt over what happened. Do we get any memories of what their relationship was like before Cody died? No, of course not. So we’re just left with what *could* have been an amazing backstory, but it’s entirely weakened by James’s apathy and our own ignorance as readers without context.

Other random little things bothered me as I was reading. James constantly refers to the students as kids within the narration, but is always reminding them and the authority figures at the CMRD that they are adults. It almost seemed like the author was trying to remind himself that he had aged them up, while simultaneously having them act like immature teenagers. Another thing: Isaiah is initially presented as being so powerful that he must be kept in an induced coma for his and others’ safety. James is tasked with helping him so that “he can exist in a conscious state without disrupting everything around him”. So what does James do? He merely walks in, has a conversation with Isaiah’s astral projection, and suggests that they wake him up. They do. Everything is fine. Um, ok. Also, maybe this is just personal preference but I could have done with fewer descriptions of how “cute” Isaiah was (which seems like another manifestation of the age issue) and how much James was attracted to his copious body hair. It’s cool that you’re into it James, but you don’t have to refer to his fuzzy chest in every single scene. I mean seriously, someone get the man a shirt anyway.

I hate to go too hard on Magic or Die, because I think there is a market out there for people who enjoy more light-hearted, fun stories about plucky groups of friends coming together to defeat an ambiguously evil organization. That’s just not what I like to read. I wanted the author to lean further into the dark stuff, the uncomfortable moral dilemmas, and the tragedy. He didn’t do that, and it left me personally disappointed. 2/5 stars.

As a side note, this book does not seem to be appearing when I search it by name on Goodreads. So in case you wanted to check it out despite my lukewarm reception, here is a direct link to the Goodreads profile (non-affiliate): Magic or Die on Goodreads!