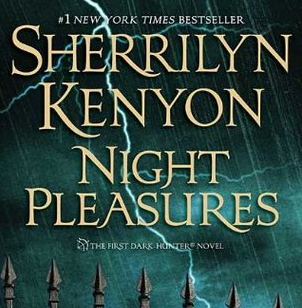 Let me sum up Night Pleasures real quick. It is a story about a woman named Amanda Devereaux, who is excessively normal. She’s an accountant, she doesn’t like fun, and she dates guys that she knows she’s not really that into because she wants stability. Despite her intense desire to live a quiet, boring life, Amanda’s family, including her identical (except in smell) twin sister, are all wrapped up the occult somehow. Unfortunately for Amanda, a demon mistakes her for her sister and tries to kill her…or something…by chaining her up and leaving her for dead. Chaining her up to a man, that is. Probably would have had better results chaining her to a basement wall and forgetting about her, but that’s not the story we’re in!

Anyway, Amanda is chained to Kyrian, a super old vampire. (Suuuuper old. Like, older than the ages of Edward Cullen, Angel, and Bill Compton combined. And tripled.) Luckily for Amanda he’s the good kind of vampire. He doesn’t drink blood and he fights against evil monsters. And, most importantly, he’s rich and hot. Kyrian’s and Amanda’s hands are quickly unchained, but their hearts are a different story. Cue non-stop pining, misunderstandings and sexy-fun-times. With demon battling and witty banter occasionally thrown in for good measure.

I started out eye-rolling almost immediately into the book. The descriptions of Kyrian from his mortal life are so Gary Stu that it felt like the passage should accompany the dictionary definition. He’s rich, a prince, and a general of the army. He’s the *best* warrior. He’s the *best* lover. Women are falling over themselves just to have the privilege of gazing upon him. Ugh. Ok, fine. There was a moment about 15-20% into Night Pleasures where I thought that I might actually enjoy this guilty pleasure of a novel. I kind of liked Amanda’s relentless boring-ness and the way she stood up to her sisters about how she just wanted to live a normal life. Unfortunately, we move quickly back into cringe territory when Amanda and Kyrian start having sex and Amanda discovers the story of his past. Let me sum it up by saying that someone needs to get this woman to a cardiologist ASAP because her heart has major issues. Throughout the course of this narrative I lost count of the number of times her heart wept, cried out, leapt, or did other things that hearts are anatomically incapable of doing.

Night Pleasures good for what it was, it just wasn’t really my kind of thing. Confession time: I read it so I could read Acheron, because I heard that is was super dark and whump-y. I have since read about half of Acheron and I can tell you that it was definitely not worth suffering through Night Pleasures. There was not much context here that I would have needed while reading Acheron, and I didn’t even like Acheron all that much anyway. Seems like the Dark-Hunter series might not be for me.

One thought on “Night Pleasures by Sherrilyn Kenyon”