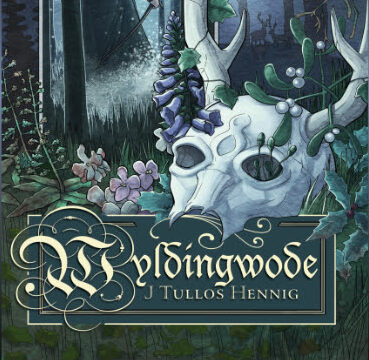 * This post contains spoilers for all the books of the Wode Series, including Summerwode and Wyldingwode.

Wyldingwode is what happens when fate rips the Ceugant apart again, but this time our characters are a little bit older and a lot more mature. At the end of Summerwode we saw our three main characters separated by fate: Robyn pulled into Barrow Mere, Gamelyn under the yoke of the Templars, and Marion left to manage hearth and home at Tickhill with new baby Aderyn. At the outset of this tale, we’ve moved forward a few years in time, but not much else has changed. Robyn is still missing, Gamelyn is still being drawn away by his Templar masters, Marion is still occupied defending Tickhill and her status as a peasant and a woman among the lords of the land.

I had a few expectations going into the book, and a few fears. My expectations were all met and for the most part my fears were allayed. I expected that the writing would be lyrical and beautiful, and of course it was. I expected (and maybe feared a little bit) that there would be a considerable amount of the narrative dedicated to Aderyn, and while she did play a pivotal role in the story, my fear that it would be all about her was unfounded. I expected that it would be a long and arduous process to reunite our triumvirate and it absolutely was.

What I didn’t expect, and what I still have some mixed feelings about, was that we would get so much of the book from Robyn’s point of view. After Robyn disappeared at the end of Summerwode we never saw where he went or what happened to him. On one hand, I was so glad that we didn’t have to wait until he was rescued to get his perspective. Robyn is my favorite of the three main characters, so a part of me was dreading this whole book where I expected he would be absent for a significant portion of it. I was very happy to have his point of view, but I have to admit that a lot of what happened to him in the caverns with the fae, while otherworldly, atmospheric, and beautiful, was also quite confusing and, at times, dragged a bit. That being said, the entire book was still extraordinarily tense and the narrative was propelling. Like Shirewode, this book had me reading frantically and excitedly, desperate for the reunion of Robyn and Gamelyn with each other, and both of them with Marion. It really felt like this book recaptured the momentum of Shirewode, and even did it in a similar way: our Lords and Lady are forced apart and must find their way back together.

I was nervous that maybe the author would go for a bittersweet ending. That Robyn would have to stay with the fae but would have a consolation day or even year with Gamelyn (like a pagan Persephone). I don’t think he is entirely free of them by the end of the book, but the ending left off in a place where they are together for the foreseeable future and that was enough for me.

J Tullos Hennig is an outstandingly talented writer. Her prose is gorgeous and evocative of life in a Medieval castle, in Outremer, or even in a magical fae cavern. This book had flaws, other readers have pointed them out: yeah the relationship between Robyn and Gamelyn was relegated in favor of the poly dynamic, yes there were parts of the narrative that were confusing, absolutely yes the focus on reproduction and religious rights and forced coupling of the lord and lady was problematic. I agree with all of that, but those issues don’t outweigh, for me, the strength of the characters who I love so much or the gorgeous writing.